"The second of the piano trios comes next, followed by the Fantasiestücke, with the first and third piano trios on the last CD. The symmetry of this programming perhaps suggests a plan to present these Schumann works at their collective best, but I may be overreaching. Certainly, just about any arrangement of the seven works across the three CDs would be possible. There is, however, another rationale for the transition between the two genres, and that’s a sonic one: the trios are recorded in a different and warmer acoustic than the quartets, which may account for the Quartetto Savinio’s somewhat emaciated sound I’ve noted so far. Two of their number, first violin Alberto Maria Ruta and cellist Lorenzo Ceriani, join pianist Matteo Fossi for the trios. The liner notes don’t indicate whether these players have previously performed together in this repertoire, but for the Schumann works alone they’re in formidable company, not least the Beaux Arts Trio. Still, I very much liked what I heard from this group, with its spontaneity and wholehearted response to Schumann’s ardent directions. Across all three trios and the Fantasiestücke, there’s an irresistible brio and obvious joy in what they’re doing. Fossi and company are consistently faster than the Beaux Arts Trio in their 1989/90 traversal of these works, but without any sense of rushing. While the finely nuanced playing of the Beaux Arts offers greater finesse, the Brilliant group’s unbridled generosity wins the day for me. Take for example the Lebhaft movements of the first trio and the Fantasiestücke, which both groups despatch with equal speed – I can imagine smiling faces on one, but mostly furrowed brows on the other. This, I hasten to add, is not a general prescription for music appreciation, but more an apt response to such arch romanticism.

It would be easy to summarise this set of Schumann’s chamber music as a tale of two acoustics, but there’s more to it than that. While the recording quality is generally first rate, capturing I should add some occasionally extravagant breathing noises, it’s just unfortunate perhaps the string quartets, arguably the slighter works, receive less sonic assistance from their venue. The Quartetto Savinio approach and deliver the quartets in the right spirit, and sufficiently well I suggest to make a library choice, if not quite providing the last word. The piano trios, however, with two of the Savinio’s members and pianist Matteo Fossi, are another matter, and competitive with the very best. There’s not only a passion but a flamboyance about these performances that do Schumann proud. I said at the beginning I found it curious this set didn’t include his piano quartet and quintet – having now heard this group play his piano trios, I’d say it’s a damn pity!" 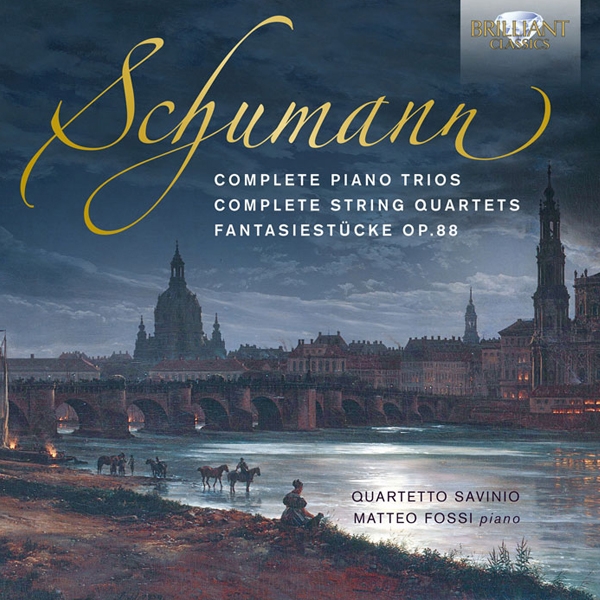